COTEC was established in 1986 to co-ordinate the views of the National Associations of Occupational Therapy of the then Member States of the European Communities. The European Council in Brussels agreed in 1983 that “mutual recognition for diplomas was an important step in creating satisfactory conditions for the exercise of a number of professions” including occupational therapists.

COTEC, Committee of European Occupational Therapists, held its first official meeting in Strasbourg in 1986. At this meeting it was decided to adopt the WFOT Minimum Standards of Education as a point of reference. In the same year two other meetings followed and it was decided the words Occupational Therapy and Ergotherapy would from now on describe the name and title of the profession. A draft constitution was made. Most of the discussions were related to the educational standards of Occupational Therapy, the regulations of the EEC, the relations with governments and other allied health professionals. Funding of EEC was received.

In 1988 the first European Congress was held in Portugal and in 1989 the first COTEC newsletter was published.

Discussions were still on the EEC directives, the education of OT’s, possible obstacles for migrants, the relation with WFOT, the description of Occupational Therapy, the areas were OT’s were working and many administrative and organizational issues. A start was made with a Code of Ethics, which was finished in 1991 and revised into Guidelines in 2010.

In 1992 it was decided to rename the CHART to the Summary of Professions.

In 1995 the need of harmonizing and developing OT in higher education resulted in the initiative of founding ENOTHE (European Network of Occupational Therapy in Higher Education) within the framework of the European Union with financial support from ERASMUS. Debate followed about the relationship and links between COTEC and ENOTHE. COTEC was accepted as contributing member of WFOT.

During the years COTEC Council meetings were held twice a year in different countries over Europe till 2012 and every 4 years a COTEC congress was organised, hosted by one of the member associations (2000 Paris, 2004 Athens, 2008 Hamburg, 2012 Stockholm).

In 2011 COTEC was registered as a legal form of an association NGO under German law and entered in the German register of associations.

In 2013 the first General Assembly of COTEC was held in Malta which finalised the restructuring of COTEC from a Delegate and Council structure to an organisation with mandated representatives in a yearly General Assembly and an elected Executive Committee whose members are not representing their country. In 2013 COTEC was registered in the EU Transparency Register.

In 2016 the first joint COTEC ENOTHE Congress was held in Galway, Ireland with the Theme Connecting Education, Practice, Research & Policy.

In 2020 the second joint COTEC ENOTHE Congress to be held in Prague, Czech Republic with the Theme Occupational Therapy Europe – Building resilience in individuals, communities and countries was postponed to 2021.

In 2021 the second COTEC-ENOTHE Congress was held online and the 35th Anniversary of COTEC was celebrated. 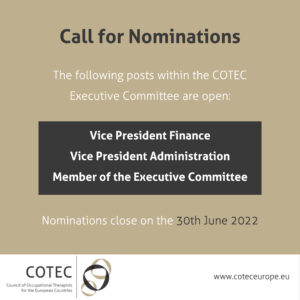